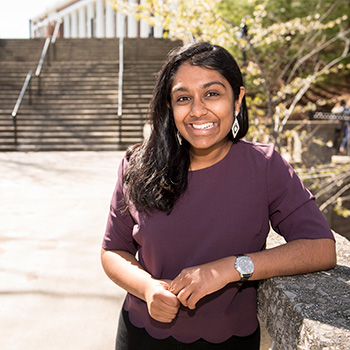 Project Summary: The rural woman has played a seminal role in the development of modern art in South Asia, her body used to express everything from nationalist sentiment to statements of social justice. To create a narrative of what it means to be a village woman, I will analyze artistic depictions by professional artists such as Jamini Roy and Arpita Singh, as well as local female artisans. I will be based in Santiniketan, a pastoral university town in West Bengal.

I was also able to apply for the CLEA grant along with the Fulbright. Certain Fulbright countries fund language study and I’m actually going to learn Bengali for 3 months before beginning my research.

How did W&L prepare you for this opportunity? W&L helped me in 2 ways: exposing me to subjects and activities that would enable me to think about the Fulbright and in the actual application process. I wouldn’t ever have taken an art history class if not for the FDR arts requirement. One class with Professor Kerin was enough to get me hooked—I added the minor soon afterward and continued taking classes when abroad at Oxford. While at Oxford, I had the opportunity to work on an exhibit at the Ashmolean Museum and also got a Johnson Opportunity Grant to work at Christie’s. After these experiences, I knew that I wanted to apply for a Fulbright to continue looking at gender in modern Indian art. Once I got in touch with Professor Ikeda, she ran me through the process and left me in the very capable hands of our faculty—Dean France, Professor Campbell, and my academic advisors all were very involved with the process.

Why did you apply for this opportunity? I applied for a couple reasons—I wanted to further my interest in art history and continue working on a period that I was invested in. I also felt unsure about grad school and knew that the Fulbright could help me decide what kind of program I would apply for. And lastly, I have always wanted to spend a year in India on my own terms—as a first-generation Indian-American, the country has a great deal of significance for me.

How will this opportunity help you achieve your goals? My research concerns women’s rights—just in an academic setting. My lived experience and my research will inform my understanding of the region as I go to graduate school.

I was an Upper Division Resident Advisor at the Global Service House, helped begin a sustainable feminine hygiene products initiative on campus, and was involved with SAIL, ESOL, and Engineers Without Borders. I also played intermural volleyball, worked as a tutor in the Math Center, and was the IFSA-Butler study abroad ambassador on campus.

I spent my junior year abroad at the University of Oxford, where I took tutorials in both Economics and Art History. Because of Oxford’s adjusted term schedule, I was able to undertake two internships during the course of the year: one in Paris,  France, where I worked in Mergers and Acquisitions and another in Ulaanbaatar, Mongolia, at the Zorig Foundation, an NGO focused on democracy and women’s rights. I spent the summer of 2013 interning at the German Aerospace Center outside Cologne, Germany and the summer of 2015 at Christie’s, the international art auction house. I was also able to go on an Engineers Without Borders trip to Santiago Atitlan, Guatemala.

I spent a summer working as an Economics Research Assistant for Professors Goldsmith and Diette. I also wrote my Economics capstone on a South Asian topic—India’s beef ban and its repercussions for minorities.

Posted on August 13, 2016 by francem
Students: Request Meeting/Info. »
Faculty/Staff: Recommend a Student for a Fellowship »