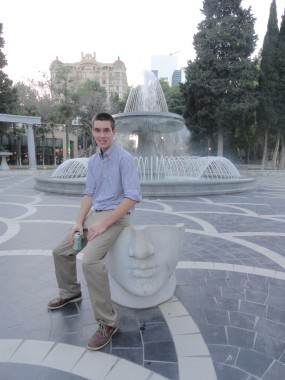 Project Summary: The US Department of State runs the Critical Language Scholarship Program (CLS) to help more Americans learn languages that are not commonly studied in the US but are in high demand. CLS participants spend 8-10 weeks during the summer in a foreign country in an immersive language program. Students live with host families and attend classes every day and also go on cultural and educational trips around their host cities and countries. CLS is open to students in all levels of collegiate education, from undergraduate to postdoctoral students. The Azerbaijani program was based in Baku, Azerbaijan. Along with six other students, I studied at the Azerbaijan University of Languages. We all lived with different host families across the city. Azerbaijan was the smallest CLS location; other cities had hundreds of students.

How did W&L prepare you for this opportunity? My advisor, Professor Bello, was really supportive of my idea to apply for the CLS program even though I was a first-year at the time. He is a history professor, but he will tell any of his students that learning a foreign language will be useful no matter what their majors are or what career fields they want to work in.

Why did you apply for this opportunity? I had studied Spanish for several years before coming to W&L but decided I did not want to be a Spanish major. I decided to pick up a new language that was not as commonly known among Americans. I also wanted to study abroad over the summer and go off the beaten track of study abroad programs in Europe. CLS offers the opportunity to study languages in highly demanding academic environments while exploring a country for two months.

Post-graduation Plans: Having been to Azerbaijan, I would love to go back as a Fulbright Research scholar after graduation. The Caucasus region is a very interesting part of the world and has changed very dramatically since the breakup of the Soviet Union. I think it is difficult for an American to understand how much a country can change in twenty years, since the USA has enjoyed incredible success and stability for centuries.

How will this opportunity help you achieve your goals? CLS gave me language skills that will undoubtedly be useful whenever I can visit Azerbaijan again. Azerbaijani is the official language there now, and Russian is quickly falling out of use among the younger generations, which were not educated in the Soviet system.

Posted on October 25, 2013 by francem
Students: Request Meeting/Info. »
Faculty/Staff: Recommend a Student for a Fellowship »